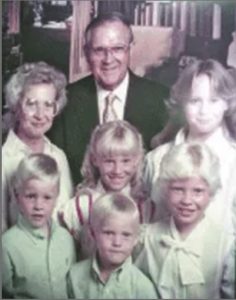 Born in Texarkana, Arkansas, Mr. Alexander began his career in retailing as a merchandise manager. When World War II began, he entered the Army Air Corps and became a second Lieutenant, serving as a bombardier navigator. Following the war, he was offered a position as merchandise manager for Golden Rule Department Store in St. Paul, Minn. In 1954, Mr. Alexander accepted an opportunity to go into the construction business. Over the next 16 years, he and his partner designed and built custom homes, luxury townhomes and apartments. His two sons, Chip and Steve, joined the business after college and Alexander and Sons became a family business. Mr. Alexander served a term as president of the Minneapolis Homebuilders Association. He and wife Verna visited Rio Verde on a golf tour in 1977 and developer John Mooty asked him to build for Rio Verde Development. The firm began building in Rio Verde in 1980. Under his leadership, the firm built the Oasis Community Center, The Rio Verde Administration Building, the Rio Verde Church and 30 to 50 custom homes each year. The firm has built over 1,200 custom homes with a high level of craftsmanship and detail.