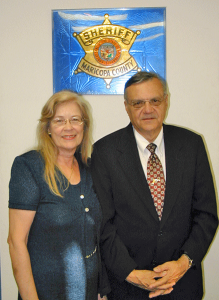 “Sheriff Joe,” as he is known nationwide, began providing police protection for Fountain Hills in 1992. As Maricopa County Sheriff, he has been the town’s chief law enforcement officer since 2002 when the Town Marshal’s office was dissolved. Widely publicized as “America’s toughest sheriff,” he has become the Town’s best-known resident. His actions as sheriff on such matters as immigration law enforcement and treatment of prisoners at the county jail have made him a controversial, yet widely popular figure. With over 10,000 inmates in his jail system, he started the nation’s largest Tent City for convicted inmates. Male inmates must wear pink underwear and there are both male and female chain gangs He has his own reality show and he is frequently seen on national newscasts. Since moving to Fountain Hills, he regularly attends charity fund-raisers and Chamber of Commerce activities. He also owns several business properties in the community. He served in the U.S. Army from 1950 to 1953. Following his discharge from the Army, he began his law enforcement career as a police officer in Washington D.C. and later in Las Vegas, Nev. His next position was as a special agent with the Drug Enforcement Administration. He spent 32 years with that agency including the final four years as head of the DEA’s Arizona branch. He was elected Sheriff in 1992 and, following his re-election in 2012 is serving an unprecedented sixth consecutive four-year term.