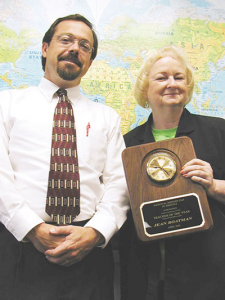 An outstanding teacher, Jean Boatman received her Master’s Degree from the University of Michigan.Â  She was a seniorÂ Fulbright scholar lecturer at Yerevan University in Soviet Armenia.She came to the Fountain Hills School District in 1990 as Coordinator of Gifted Education. â€“ teaching gifted children in all three schools. She initiated an exchange program with a sister school in St.Petersburg, Russia after the breakup of the Soviet Union. In 1991 and 1992, she served on the American History Day Planning Committee for National Assessment of educational Programs and was named Outstanding National Day History Teacher of the Year in 1994. She is one of only a few teachers to receive that honor in two states. She retired from teaching in 2009 after 46 years in education. But that did not end her involvement in promoting educational opportunities in the community. She worked with the Daughters of the American Revolution essay contests and scholarships, the P.E.O. scholarship program, the Mayflower Society program, the River of Time Museum junior docent program and an art docent program she adapted for elementary school students. She volunteered weekly at Four Peaks Elementary School teaching beginning chess to advanced 5th grade students. She continued to mentor Fountain Hills Middle School students on their National History Day projects. She served on the board of the Fountain Hills Cultural and Civic Association and was serving on the Fountain Hills School Board at the time of her death in 2011.