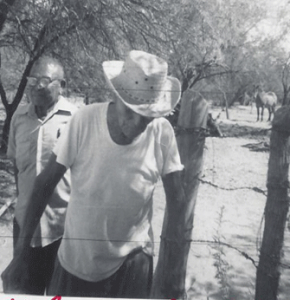 After working as a miner in Clarkdale, Bootha Brown returned to Fort McDowell and became a tribal leader. He was elected to the tribal council and served as secretary from 1954 to 1960. He was well respected by all tribal members. He was concerned with boundary issues and was involved in CAP issues which lead to early concerns about Orme Dam and what it might do to the tribe. He and other tribal representatives met with officials of the federal government about concerns of land and water rights. He also helped in taking the tribal census. The father of one child, Bertha, he was married to Josephine Burns. He passed away in 1973.
Webmaster’s Note: Photographs of some of the earlier Fort McDowell Yavapai Community members are often difficult to obtain. Mr. Brown is a classic example of this. But he was a very highly respected member of the community.
2012, Fort McDowell, Members