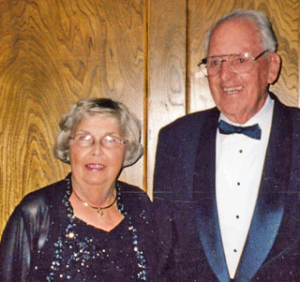 A tireless volunteer, Mr. Buchanan is this year’s inductee from the Verde Communities. He immediately became involved in Rio Verde after moving there in 1987 from Omaha, Nebraska. He started and was chairman of a 52-member golf group and served on the Rio Verde Country Club Greens Committee for two years. Easily identified in Rio Verde by his Cobra sports car, he is an active long-time member of the Fountain Hills Car Club. Described by his friends as an outstanding leader in Rio Verde, he is involved in many organizations. He was co-chairman of the building committee when the Rio Verde Community Church added a 600-seat sanctuary in 1999. He spent many hours seeing that the project was completed to their specifications. A member of the Fountain Hills Rotary Club, he serves as Sergeant-at-Arms and is always available for cooking duties at the Rotary booth at the art fairs and is a Rotary bell ringer for the Salvation Army during the holiday season. He and wife Kathryn celebrated their 60th wedding anniversary in November 2010. Outside the area, Mr. Buchanan was a docent for four years at the Champlain Flight Museum in Mesa, is a docent for the Commemorative Air Force Museum two days a week, devotes one day a week to the Navigator program at Phoenix Sky Harbor Airport and volunteers at the Little Red School House in Scottsdale one Sunday a month. His wife Kaathryn died in 2013. In 2014 he married Genny Shappley.