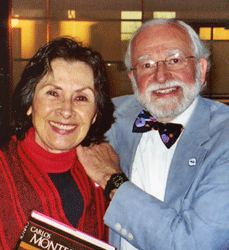 A political activist, Mrs. Butler worked with the Fort McDowell Yavapai tribe in their campaign to defeat the planned Orme Dam that would have flooded most of the Fort McDowell Indian Community. She received a letter from Booth Brown, an elder from Fort McDowell, which initiated her efforts to assist the Yavapais in the defeat of Orme Dam. In 1972, she helped then Tribal President Robert Doka with correspondence to the proper officials in Washington, D.C. The following year, tribal members voted unanimously to have Mrs. Butler continue to assist them. A delegation of Fort McDowell residents, with assistance from Mrs. Butler, distributed copies of a poll to members of Congress showing most of the tribe’s residents were opposed to having the dam built. In 1981, the federal government announced it was dropping the Orme Dam from its area water reclamation plan. The people of Fort McDowell were victorious, allowing them to keep their homes, their culture, their way of life and their own very being.