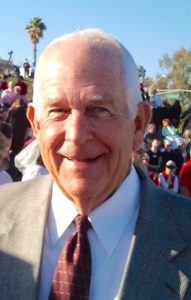 With a 40-year career as a civil engineer, Mr. Butler brought with him enormous experience with which to help his new community in 1999. Mr. Butler is a registered professional engineer in 18 states and has served as division president for an international consulting firm of architects, engineers and planners. He is past president of the Consulting Engineers Council of Missouri.Â He has used his experience to help transform the community to one of beauty, working on trails, in the parks, and most recently on the Community Garden.

He has just been named to the Sanitary District board in Fountain Hills, and the addition promises to help the community move forward to improve the water quality to keep parks, fairways and other areas in the best possible condition. Mr. Butler has been instrumental in developing a vision for the community as a member of the Downtown Visionary Project and co-chair of the Vision Fountain Hills. He also served on the Chamber of Commerce Business Vitality Advisory Council. He also was a member of the Community Strategic Planning Community. He is treasurer of Fountain Hills Cultural and Civic Association.

It has been said of Mr. Butler, â€œMost people think of philanthropy as just giving money. However, a broader definition recognizes the giving of oneâ€™s expertise and time to public projects. Mr. Butler exemplifies dedication to public service.â€

He is no stranger to the Hall of Fame. He received the Legacy Award along with Jenny Willigrod for their work on the Greening of Downtown program.