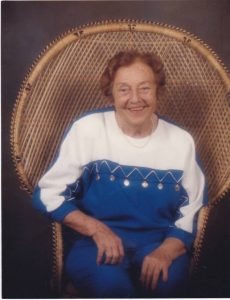 When Ms. Charles decided to move back to Minnesota on her 87th birthday, a party was held in her honor at the home of Jerry and Jackie Miles. He stated, â€œWe thought it a good thing to do for a gracious lady that has done so much for Fountain Hills.â€

A former mayor of Dellwood, Minnesota, she led an interesting life before moving here. She was a member of the womenâ€™s national polo team. A licensed pilot in the 1920s she flew with Charles Lindbergh in the Spirit of St. Louis when he visited Minneapolis following his historic transatlantic flight. She went to work in a bookstore in St. Paul and with her usual energy, she built it into one of the most prominent bookstores in the Midwest. Among her collection of autographed books were those of Marie Curie and and Ann Morrow Lindbergh. She was also a renowned restauranteur and restaurant consultant in Minneapolis, Florida and the Caribbean.

On one buying trip to New York City she sat in on a roundtable discussion with Dorothy Parker and such literary notables as F. Scott Fitzgerald, Ernest Hemingway and William Faulkner. She was also a renowned restauranteur and restaurant consultant in Minneapolis, Florida and the Caribbean.

She moved to Fountain Hills in 1975 and was instrumental in starting an activity called Morning Call for newcomers. Having politics in her blood she soon found herself appointed to a seat on the controversial Road District Board of Trustees. Former trustee Monie Vandervort said at the party, while you may not always agree with her, you soon found out that it was better to have her on your side. She wasnâ€™t afraid of anybody or any issue.â€ Her exchanges with fellow board member Jesse Genin became quite heated and memorable. She never backed down on issues she supported.

Ms. Charles was very active with the Fountain Hills Incorporation effort and was one of the signers of a â€œDeclaration for Independenceâ€ which asked Scottsdale to grant permission for a Fountain Hills Incorporation election.Â Former school board President Mary Wood spoke of a time when Erna took it upon herself to raise money, virtually overnight, to supply sports teams at Four Peaks School with uniforms.

She was also honored as one of the communityâ€™s top 20 volunteers at the Fountain Hills 20th anniversary celebration. If there was a cause, she was there and helped make things happen.