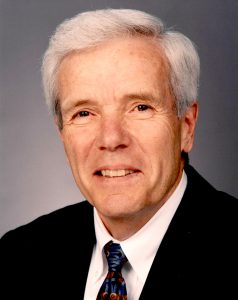 Gerry Colbert and his wife, Marge, moved to Fountain Hills 21 years ago from Illinois. He has been an active participant in the community ever since.

He was raised in Duluth, Minn. After returning from two years in the Army, he attended the University of Minnesota – Duluth, obtaining a bachelor’s degree in business and economics. Upon graduation, he went to work as a claim representative for State Farm Insurance Companies. He worked his way through the ranks, eventually being named vice president in charge of the company’s auto claim operation in its corporate headquarters in Illinois.

Gerry is a member of the Church of the Ascension and has served on the Pastoral Council, including two years as president. Additionally, he currently is a hospitality usher and Eucharistic minister as well as serving on other committees.

He served on the Library Association Board for nine years, while acting as treasurer for eight of those years. He also managed the library’s bookstore for a number of years. He has been active helping senior, promoting driver safety, preparing tax returns each year for seniors and served on the Senior Advisory Commission.

Gerry was involved in the Chamber of Commerce as an ambassador and worked the information booth during two art fairs. He is a member of the Men’s Club, serving as treasurer, board member and past president.

Gerry serves on the finance committee of the SunRidge Canyon HOA. He also is on the board of the L. Alan Cruikshank River of Time Museum, serving as president. He is actively involved in the success of the organization.

Gerry and Marge have six children and 15 grandchildren spread across the United States. Even with the large numbers and distances, they are able to get together for family reunions on a regular basis. If you want to find Gerry, you can find him on the golf course on Tuesdays and Thursdays and at the poker or bridge tables at the club during the week.