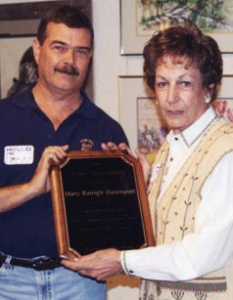 During Fountain Hills’ early years, there were few who contributed so many volunteer hours as Mrs. Davenport. From the day she moved to Fountain Hills from Michigan in 1974, she soon became the community’s number one cheerleader, supporter and volunteer. Whether it was standing out in the hot summer sun selling soft drinks at the community’s Bicentennial celebration in 1976 to selling hot coffee on a cold morning prior to the start of the first Great Fair, Mrs. Davenport has been there to serve her town. She helped found the Fountain Hills Civic Association, the Fountain Hills Republican Club, the Fountain Hills Women’s Club and the Church of the Ascension Rosary Society. She was also a charter member of the Fountain Hills & Lower Verde Valley Historical Society. She served multiple years on the boards of these organizations. One of the leading volunteers on the Town’s Incorporation Committee, she worked the polls, rang countless phones, sold tickets for fund-raisers, organized candidate debates and secured political contacts. One co-volunteer said, “Every board on which she served, quickly learned that if a task was assigned to her no matter how important or insignificant, it would be completed in a very short time.