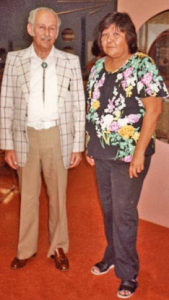 The daughter of Cecilia Blake and Richard Davis, she became a vocal advocate of fighting for the rights of her people, the Yavapai of Fort McDowell. She was always present at the Tribal Council meetings and was most vocal in her protests that helped the tribe defeat the possibility of Orme Dam being built and flooding their land. She traveled to Washington, D.C. with other tribal officials to express their concerns about the possibility of a dam being built that would flood their lands. As an active member of the National Congress of American Indians, she was able to get their support against the dam project.After the plan was defeated, she began teaching the history of the Orme Dam issue and the Yavapai culture to the tribe’s younger members. She served on a variety of important committees, always expressing her views. She was proud of being the grand marshal of the Orme Dam Days Parade one year. On her own time, she loved to quilt and be with her grandchildren. She loved basketball and played in her younger days. One of her favorite adult activities was being a scorekeeper for the Native /American Basketball Association tournaments.She also traveled to the Native American Film Festival each year and she loved meeting the stars.