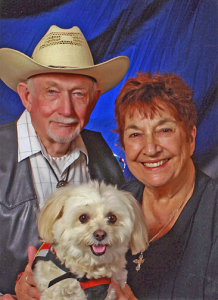 Arlie Denomme began her service to the community in 1991 as a volunteer at the Chamber Visitor’s Center. She received the first Community Service Award in 2003 and is a past president of the Four Peaks Women’s Club. A member of the board of directors of the Fountain Hills Theater, she is the prime fundraiser for the annual Broadway in the Hills production. She also serves on the board of the Fountain Hills Historical Society and has chaired different events such as the Society’s entry in the Thanksgiving Day Parade, Dinner Chair for the Historical Society and runs the Holiday Mart as a major fund-raiser for the museum. She is a member and former board member of the Daughters of Isabella and is an usher at the Catholic Church of the Ascension. Active in politics,she has been a Republican Precinct Committeewoman for many years and has served as a clerk for the Maricopa County Elections Department. She served as Sergeant-at-Arms in the American Legion Auxiliary for four years, as historian for one year and is presently serving on their Executive Board.