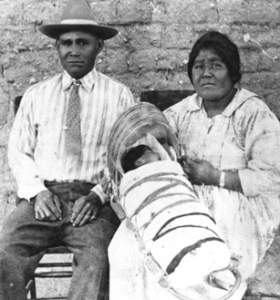 Dock Doka, named to the Hall of Fame by the Fort McDowell Yavapai Nation, is recognized as the first resident of what has become the Fort McDowell Yavapai Nation. He was active in getting President Theodore Roosevelt to establish the reservation in September 1903. He was among other Yavapais who were held captive in San Carlos, Arizona in the late 1800s. After his release, he migrated to this area of the lower Verde Valley, the land of his tribal ancestors. After the reservation was established, he worked as a farmer and rancher. A God-fearing man, he helped establish and build the original Fort McDowell Presbyterian Church in the early 1920s with Freeman Walker. He also helped design a canal system for the tribe, most of which is still used today. A generous man, he didn’t hesitate to share his crops and animals for food with fellow tribal members who were hurting during the Great Depression era. Just prior to his death in 1954, he was one of the petitioners to seek fair compensation from the federal government for their ancestral land. That compensation was eventually granted some 20 years later.