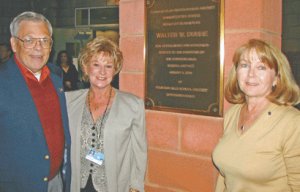 Walt Dunne completed his 10-year career in administration of the Fountain Hills Unified School District in 1998, including nine years as superintendent.Â He has also served on the boards of the Fountain Hills Senior Center and the Fountain Hills Historical Society. He also serves on the Town’s Senior Services Advisory Commission. He was originally hired by the School District as Director of Financial Services. He was named interim superintendent in 1989 and was named to continue in that position the next year. He has been a long-time member of Noon Kiwanis and served as its president in 2001-02. He worked to promote several bond issues for the district. He oversaw the construction of McDowell Mountain School and worked on the bond election that resulted in the construction of the Fountain Hills Junior/Senior High School. He volunteers one day a week to deliver lunches under the Home Delivered Meals program. After his retirement, he became active with the River of Time Museum, where he works part-time as an administrative assistant and bookkeeper. In 2006, the Fountain Hills School District honored Dunne by renaming the district administrative office building in his honor.