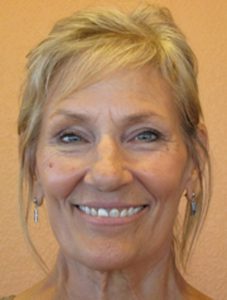 Debbie Fisher is well-known in Fountain Hills. With her angelic voice and musical talent, Debbie appears at numerous events as part of the main entertainment. She also serves on a number of committees for various organizations in Fountain Hills.

She was born in Minnesota and lived in South Dakota, Germany, Texas and Idaho on military bases. She moved to Arizona in the mid-1980s, teaching K-8 music in the valley during that time. She married her husband, Greg, and moved to Fountain Hills. Debbie now has been teaching music locally for more than 16 years. She works with about 200 children each week.

“I absolutely love working with younger children,” Debbie said. “I love to impress the love of music in a natural way. I try to make sure they continue to love and seek musical education through their lives.”

Debbie has taught music at Fountain Hills Charter School for 21 years and at private schools for 14 years prior to that. She also gives private music lessons. Debbie has been singing in adult choirs since she was 14 and loves choral music, which was her major emphasis through college.

In her musical world, Debbie plays and sings in the Fountain Hills Community Band and is chair for the Community Band committee for the Board of Directors of the Fountain Hills Cultural and Civic Association. She plays trumpet and sings for all the various veterans ceremonies. In 2016, she co-chaired and in 2017 and 2018 chaired the annual FHCCA Choir Fest. She sings and plays often for residents at Fountain View Village. She also organizes musical events for children at the Community Center.

Debbie’s “non-musical” life revolves around service to the community. She is a member of Noon Kiwanis.