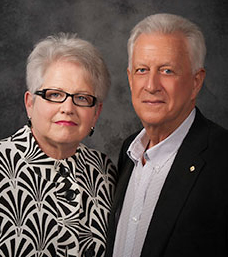 An active community member in Fountain Hills’ formative years, Walt Franklin was most instrumental in the design, building and funding of the Fountain Hills Community Center. He was founder and chairman of the Community Center Action Committee. He served as president of the Fountain Hills Civic Association from 1993 to 1996. Prior to that, he served as a trustee of both the Sanitary and Road districts and served as chairman of the Road District’s Joint Powers Board from 1988 to 1990. The Franklin family moved to their new home on Trevino Drive in 1978 where Walt later became a founding board member of the Neighborhood Property Owners Association. In 1996 they moved to the first home constructed in the Golden Heritage subdivision of SunRidge Canyon. Franklin sold his business, Cheese & Dairy Products Ltd., in 2010 and retired.