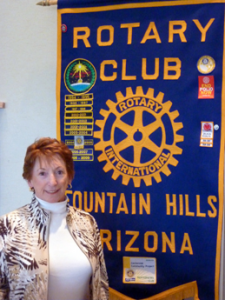 Peg Glink, a Rio Verde resident is highly respected and contributes her time to many area organizations. She has served as President of the Fountain Hills Noon Rotary Club. She served as a commissioner on the Rio Verde Fire District Board from 2008 to 2009 and as a member of the Community Relations Committee. She served as a member of the Rio Verde Community Association Board from 1998 through 2001. She is an active leader of the Rio Verde Community Church, serving on its Benevolence Committee and numerous yeas on the Christmas Project Committee to benefit local charities and families. She also serves on various committees for the Rio Verde Country Club Golf Associations. She volunteered for three plus years at the St. Dominic’s Food Bank in Fountain Hills. Another activity she enjoys is working with children in the Fountain Hills School District as a mentor. She also does volunteer work for the American Cancer Society, American Red Cross and Heart Fund and is a Bell Ringer annually in Fountain Hills for the Salvation Army. Her motto is, “Give Back, Create Change and Build a Better World.”