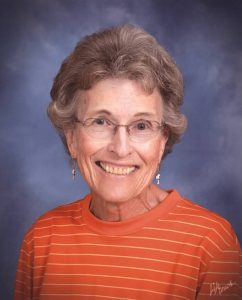 She and her husband, Jack, arrived in Rio Verde late in 1989. Shortly after they purchased property and built a home, Mrs. Hale retired in 1994 after teaching elementary and special education for 30 years in the Minneapolis Public Schools. Her involvement in education has continued since the fall of 1994, volunteering in the Scottsdale School District.

Since moving permanently to Rio Verde, she has served six years on the Rio Verde Community Association Board, two years as secretary and two years as president. She also served on the Government Relations, Architectural, Community Center and several Board Nominations committees. She her husband, Jack, produced the Roadrunner (Rio Verdeâ€™s newspaper) for many years. She also served on Golf Clubâ€™s Membership Committee with responsibilities for welcoming members, both golf and social.

The Fountain Hills McDowell Conservancy was in the planning stages when Merideth was a member representing Rio Verdeâ€™s interests. The involvement with environmental issues continued with six years spent on the McDowell Park Association. She chaired the Membership Committee. Currently, she is secretary of the Verdes Wildfire Protection Inc. Her involvement has been from the inception of the Firewise effort.Â  Other activities include initiating games of pinochle, 500 and bunco within the Rio Verde community. She also has organized a weekly â€œwhat- everâ€ golf group for women that just want to have fun.