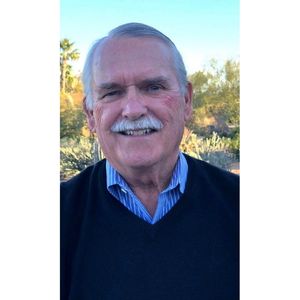 Greg Harvey first set his eyes on the Lower Verde Valley when his parents, Don and Mickey Harvey, purchased a vacation home on East Poco Vista in the early years of Rio Verde development in 1977.

Over the ensuing years, he became captivated by the beauty and charm of the area, and in 2004, he and his wife, Sally, purchased their own home in the Verdes. Although Greg had become the managing partner of SCV Management, an industrial real estate management partnership headquartered in Minneapolis, Minn. They gradually found themselves drawn to this area.

Greg gradually learned that with frequent trips, he could manage eight family partnerships and their 800,000-square-feet of office and warehouse space and still spend his time living primarily in the Verdes.

The Minnesota management firm continued to prosper at Greg’s direction, and he found himself taking on additional responsibilities in his adopted home environment:  In 2009, he was elected to the Rio Verde Community Association board of directors, serving two three-year terms. During this period, he was appointed to Streets and Drainage Committee chairman in 2010. He and the committee adopted new ideas and procedures. Greg served in that capacity through 2019.

He served as president of the Association board for this unique active adult community for the 2014-2015 year, all in his energetic, ambitious style.

Aside from Greg’s involvement with the Association board, Greg found time to serve on the RVCC Golf Committee, and along with Sally, chaired the Couples Golf Committee from 2009 to 2011.

One of his most significant accomplishments for the Community of Rio Verde is the establishment of a permanent system to rehabilitate and replace the extensive private road surfaces in a timely and ongoing program. He also assisted in starting and currently serves on the board of the Rio Verde Community Foundation, which was recently approved by the IRS as a 501(c)3 organization for accepting tax deductible donations.