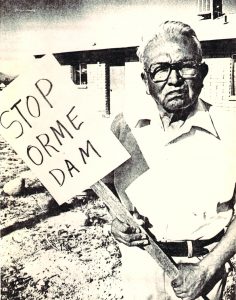 One of the most respected members of his tribe, Hiawatha Hood is this yearâ€™s inductee into the Lower Verde Valley Hall of Fame from the Fort McDowell Yavapai Nation.Â He was born in Camp Verde, Ariz., in 1912. He was elected Tribal Chairman in 1977. He was a strong, passionate leader and an eloquent spokesman for the tribe in its fight against the U.S. government over the proposed building of Orme Dam. To Mr. Hood, the construction of Orme Dam would mean the destruction of the tribeâ€™s Yavapai culture, way of life and end of their exist-ence as Yavapais.

In a July 23, 1977 Phoenix television station interview, he used humor to reply to Senator Barry Goldwaterâ€™s support of Orme Dam. He closed the interview by quipping, â€œI want to say to Sen. Goldwater that Iâ€™ve been looking for my tomahawk and when I find it, his scalp will be hanging from my tee-pee.â€ After the defeat of Orme Dam and its elimination from the Central Arizona Project plan in 1981, Mr. Hood spearheaded the installation of a formal tombstone over the mass grave in the tribal cemetery for the victims of the Skeleton Cave Massacre. In 1872, in a surprise attack, the U.S. Army killed 75 Yavapai, men, women and children. Many Yavapai living in Fort McDowell today lost close relatives in this attack.

Mr. Hood was a loving husband and father.To the end of his life, Hia-watha Hood was tireless in working for the dignity and honor of his people. He passed away on Oct. 9, 1991, but his actions for the tribe and the legend he created will live on forever. Mr. Hoodâ€™s granddaughter, Trina Hood, will accept on behalf of her grandfather.