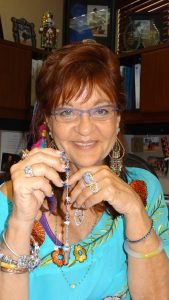 Sami marks her 31st year in business in Fountain Hills this year. Her jewelry career started in her early 20s when she began selling turquoise jewelry on Daytona Beach, Fla, She opened her first store, Samiâ€™s Gold, in Scottsdale in the late 1970s. In 1986 she moved to Fountain Hills and opened Designs by Sami. After spending 12 years in a 900-square-foot location, with two salespeople and a jeweler, Sami built a freestanding store, opening on the Avenue of the Fountains in 2002 with a 3,500-square-foot jewelry store.

She went into business with Four-Peaks Mining Company, serving as the main distributor of the brilliant Arizona Four Peaks amethyst, one of the highest quality quarries in the world. Sami leveraged her love of Four Peaks to promote Fountain Hills and the area, designing her store around the gem and creating mountains of publicity for the community.