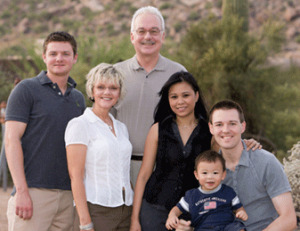 thority of New York and the New Jersey Police Department. He retired as a sergeant. After relocating his family to Arizona, he became very involved in governmental and area club activities. In 2006 he was elected to serve as a member of the Arizona House of Representatives for District 8. He is also a professor of criminal justice at Scottsdale Community College and Director of the college’s Administration of Justice Studies Program. Prior to teaching at Scottsdale Community College, he taught at Arizona State University John served six years on the Fountain Hills Town Council and three years on the Lafayette, New Jersey Town Council. He was awarded a BA in Liberal Arts from NYU, a Masters Degree in Government from St. John’s University (Queens, NY), and a Ph.D. in Criminal Justice from Rutgers. He has served on the Parks and Recreation Commission, Community Center Volunteers, Senior Services and is a member of American Legion, Knights of Columbus, Civic Association, Historical Society, and Friends of the Chamber of Commerce.