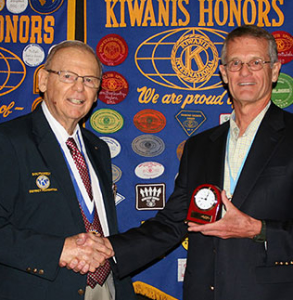 Since moving to Fountain Hills in 1995, Ed Kehe has been one of its most active residents. He spent 11 years as a Home Delivered Meals volunteer. He served four years from 2004 to 2008 on the Town Council and two years on the Committee of Architecture for the Neighborhood Property Owners Association. As a member of the Town negotiating team, he successfully reached an agreement with the State Land Department for the 2006 annexation of the state Trust Land. He served at different times on the board of directors of the McDowell Park Association, the Golden Eagle Education Foundation and Fountain Hills Sister Cities Corporation. He also served on the Technical Advisory Committee and the Strategic Plan Advisory Committee in 2004 and 2005 to develop the 2005 Fountain Hills Strategic Plan. A member of the board of directors of Noon Kiwanis he served as that organization’s president in 2012-2013. He is also a member of the Fountain Hills Cultural and Civic Association, the Fountain Hills and Lower Verde Valley Historical Society, The Club and he served as an usher at the Catholic Church of the Ascention.