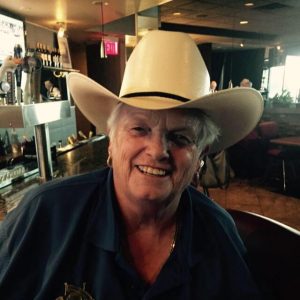 There are few things Phyliss Kern has not done for Fountain Hills. “She has done more for Fountain Hills than anyone else,” according to one of Phyliss’ nominators. “Fundraisers, events for the town, St. Patrick’s Day, fireworks, Oktoberfest, Thanksgiving Day Parade, Balloon Glow, etc.”

Phyliss is a long-time resident of the community. An Iowa farm girl from Owatonna, Minn., Phyliss came to Arizona in 1977 as a visitor. She fell in love with the desert and the climate and became a Fountain Hills resident in 1983.

Arriving in Arizona, she was ready to start a new career and take on new challenges. She has more than 35 years’ experience in the Arizona real estate market, including residential, commercial, new construction, horse properties and land sales in the area.

Throughout the years, Phyllis has been involved in various community projects: the Chamber of Commerce building the annual Thanksgiving Day Parade, the Fountain Hills Skate Park, chaired the “Circle of Peace” sculpture for the RMS Realtor Group, and she has attempted to get a movie theater to town for 20 years (still a work in progress).

Her most recent endeavor is with the Wenger ShowMobile – a mobile stage. The stage has been utilized by numerous church, civic and private parties to use in town and nearby events. She works tirelessly to help bring exciting events to town such as the annual Fountain Hills fireworks, Oktoberfest, Arch’s Chili Cook-Off, St. Patrick’s Day, Balloon Glow and others.

Phyliss has been awarded numerous real estate awards from Coldwell Banker’s President Circle Award to the Century 21 Double Centurion Award recognizing her annual sales. In 2003, Phyllis and her daughter, Lisa Kern, formed Century 21 Kern Realty. In 2004 and 2005, Phyliss was awarded the highest individual awards for sales production, the Century 21 Grand Centurion and she continues to maintain a top agent standing in Arizona.

In early 2011, the Kerns decided to go off on their own and became Kern Realty, Real Estate, and Rentals with a focus on Residential Sales, Rentals and Property Management.