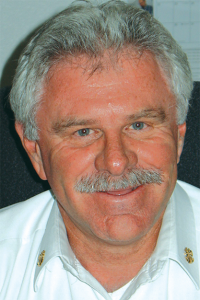 Scott LaGreca retired after 25 years with the Chicago Fire Department and would become the top fire official in Fountain Hills before his death in 2013. He received his bachelor’s degree at Southern Illinois University in 1978 and a master’s degree in technology from Arizona State in 2004. He received executive fire officer certification from the National Fire Academy in 1987 and was commissioned as a Chief Fire Officer in 2006. In Chicago he had served as a fire-fighter and worked his way up through the ranks as a lieutenant, captain, battalion chief, director of media affairs and executive assistant to a deputy fire commissioner. He was considered the stabilizing factor in the town’s transition from a fire district to a town-operated fire department. He was hired by the Fountain Hills Fire District as assistant chief and fire marshal in 1996. He was named interim chief in Fountain Hills in 2000 and served as assistant to Rural/Metro’s chief for the Maricopa County Operations. He was named chief in Fountain Hills in 2005 and served in that capacity until his retirement in 2013. He was a fire program advisory board representative with Arizona State University and an adjunct professor there. He also was a member of the Institution of Fire Engineers and served as the town’s emergency management coordinator.