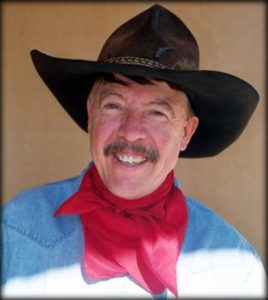 The person who nominated him said, â€œCarlos is one of those unique people who always makes people smile and feel good. He is generous and kind and interesting. There may not be a category for Carlos Hall of Fame because he is one-of-a-kind.â€Before he was an award-winning Western artist, before he was a cow-punching, rope slinging cowboy, he was born blind with cataracts, Hadaway lost his sight at the age of 10. For the next five years, his vision faded in and out, but after six operations he was able to regain his sight.

When the doctors took the bandages off his eyes he was so impressed with color that he started cartooning as a teenager. He became an editorial cartoonist for a San Diego newspaper. He created a character — a little friar with a halo and a bat standing at home plate — that later became the first logo for the San Diego Padres baseball team.He joined the Navy and became the shipâ€™s cartoonist. After the navy, he moved to Arizona and became a cowboy. He participated in roundups, singing by the campfire and playing an extra in many Western movies that were filmed in Arizona â€“ thus he became known as â€œThe Arizona Kid.â€

He has been described as looking like he stepped out of a â€œGunsmokeâ€ episode. A real-life cowboy, he wears pointy boots, an old vest and a 10-gallon hat. He was living in Flagstaff where he developed his western painting skills. He began participating in the Fountain Hills art shows twice a year. He moved to Fountain Hills with his bride, Nancy, in the late 1990s.

He has become a â€œpied piperâ€ walking around Fountain Park, making new friends and encouraging some of the older ones to enjoy the exercise that walking brings.He has hosted fountain Hills High School students to his home, which is an virtual Museum of Western memorabilia, to see his paintings, his cartoons, cowboy movie memorabilia and letters from famous film stars. He donated a painting of the Grand Canyon which hangs in town hall. One of his paintings hangs in the Arizona State Capitol and he received the George Phippen award for Western artists in 1979. The artist appreciates the tranquility of painting. â€œI love cowboying more than anything in the world, but I make my living painting,â€ he said. â€œIâ€™ve broken my sternum, all my ribs.