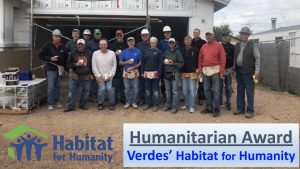 The volunteers of the Verdes’ Habitat for Humanity are nearing completion of their 24th home.

The Rio and Tonto Verde communities in Rio Verde have sponsored and built these homes which have become a proud tradition. The residents of the communities have contributed over $1.4 million over 24 years and are the only community in the United States to have built and paid for 24 homes. And yes, the 50 or so men and woman volunteers hammer nails.

One may ask why these communities support Habitat for Humanity and the answer is simple. One look at the home recipients’ faces when they receive the keys to their new home is all the incentive needed.

Unlike many other charities, Habitat asks home recipients to pay interest-free mortgages and put forth 400 hours of sweat equity. Plus, they go through financial training and stringent qualifications. These homes are not a gift, rather an opportunity to home ownership. More than 90 percent of the homes made available to those in need have the original recipient still living in them after 10 years.

A member of the 2007 class of the Hall of Fame, Jim Isaacson started the community’s relationship with Habitat in September 1995. He visited the organization and asked how the Rio Verde community could help.

He was told they needed a tractor. Jim went back to the community and raised the money to purchase a tractor. However, Jim didn’t stop there. He wanted to do much more. His passion to help his fellow human beings led to sponsoring a home annually for Habitat. Sadly, Jim passed away in 2015.

This left a huge void in the project and the relationship between the community and Habitat was in doubt. To ensure the project’s continued success, Tom Mulleady at the prompting of other volunteers raised his hand to fill the void and head the Verdes’ Habitat for Humanity Committee.

The committee helps with the annual fund drive and the coordination of work schedules. The entire committee, along with a host of volunteers, stays very busy from October to March with promoting Habitat in the community and constructing the home.