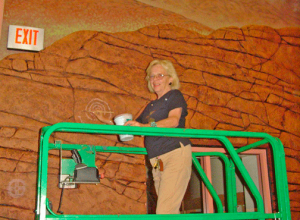 Judy Starr Confer is the second Legacy Award winner. She and Steve Busker moved from Michigan to Fountain Hills in 1994. Her trade was interior design. Upon moving to the desert, she created new products to market. Among them are the Cactus Clan Saguaro People and featherweight rock petroglyphs. A graduate of the University of Illinois with a degree in education and political science, she also attended classes at the University of Madrid. Her interest in history and design brought her to the Fountain Hills & Lower Verde River Valley Historical Society. She served three terms on its board and was most active with the Museum Design Committee. When the museum’s first volunteer director, Jerry Wilhelm, stepped down during the construction phase due to an illness, Ms. Confer answered the call of the Historical Society board to become the first paid museum director. She spent numerous hours with her fellow design committee members in the creation of the displays built by Sunbelt Scenic Design Services of Tempe. For the opening on March 1, 2003, she created “Cactus Cowboy,” the museum’s official mascot. Putting in far more than the 20 hours per week she was paid for, Ms. Confer worked diligently to get the word out on the new northeast Valley museum attraction. She became a member of the Museum Association of Arizona and the Central Arizona Museum Association. Her hard work was rewarded when the Arizona Historical Society honored the River of Time Museum with “certified museum status” just nine month’s after its opening. Certification generally takes up to five years. But her accomplishments with the museum are not the primary reason she is receiving this honor. Through her efforts, she has become the main reason for bringing the people of Fort McDowell and Fountain Hills closer together. Whether it was waiting up to six hours to speak at a tribal council meeting to attending every major function held each year at Fort McDowell, her presence has been appreciated by the Yavapai residents and leaders. She stops at roadside frybread stands and is invited into many of their homes for dinner. She and Dr. Clinton Pattea and his wife, Rosiebell, have become close friends.Â One family presented her with an authentic Yavapai camp dress, and the tribal council presented her with a Yavapai blanket, considered to be a high honor. Through her efforts, a trust has been established between the leaders of both communities. In 2010, Ms. Confer received the Four Peaks Chapter of the Daughters of the American Revolution’s first award honoring Women in American History. In presenting the award, chapter officials noted, “She has studied the history of the Fort McDowell Yavapai Nation and is a liaison with the Yavapai community, working with Tribal Council and other community members. She has done much to unite Fountain Hills and Fort McDowell for common causes.”
2011, Legacy Award