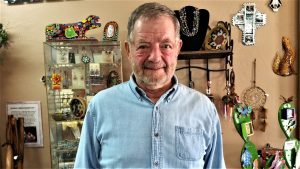 The Town of Fountain Hills pays for the Trailblazersâ€™ tools, but other nominal expenses are borne by the group.The trails in the Preserve are used by hikers from all over the Valley. Craig said there are trail counters located in the Preserve to determine the number of people using the trails.â€œWe donâ€™t have an exact count, but for instance, we have had 200 hikers per day on the Lake Overlook Trail since the first of January [2018],â€ he said. In addition to building and maintaining the trails, the Trailblazers have developed a trail map for the Preserve, as well as all the signage on the trails.

A group of volunteers, averaging about 17 people per week, meet each Saturday to do the work throughout the Preserve, according to Craig.â€œWe traipse a little farther each week to finish and maintain the trails,â€ he said. Volunteers range in age from 30 to 85. There is a father and son team, two married couples and two brothers among the group. Craig currently is working with a young man who is working on his Eagle Scout badge who is doing maintenance on the Lake Overlook Trail.

â€œWe are all real pleased with what we are doing,â€ Craig said. â€œI think the best part of all of it is the camaraderie.â€ He said much of the work is done by older retired people in their 60s and 70s. â€œWe welcome all ages, and we will be happy to train newcomers,â€ Craig said.Craig said he also helps build trails in Pine, Ariz., in the summer. â€œIt is really great to know you have done something that will last for many years,â€ he said. â€œWe are very appreciative that people use the Preserve and enjoy the outdoors.â€

Craig said he worked closely with Roy Kinsey before Kinsey and his wife, Bev, moved out of the community. â€œThey were very instrumental in all of the improvements in the Preserve,â€ Craig said. Craig will receive the Legacy Award on behalf of the Sonoran Trailblazers at the Lower Verde Valley Hall of Fame awards dinner, set for March 28.