Downtown Greening Project co-chairs Jenny Willigrod and Jerry Butler are the recipients of the fourth annual Legacy Award. The Downtown Greening Project was conceived as a part of the Swaback Partners Downtown Development Plan. Since forming, the committee has placed 140 trees in Fountain Park, established a low-water landscaping demonstration garden, a wildflower garden, landscaped the performance pad area in Fountain Park with sculptural planters and has placed three columns in the park for commemorative donation plaques. Most recent projects by the group have been planting trees on vacant lots in the downtown district. Plantings have taken place on the Avenue of the Fountains west of Chase Bank and Saguaro Boulevard just north of All American Grill. The landscaping of vacant properties improves the overall appearance of the downtown, which in turn, improves the business appeal to potential new businesses. Landscaping makes the available commercial areas appear more attractive and integrated into the existing retail areas rather than looking like the neglected end of the developed business core. The addition of greenery along the sidewalk also encourages more pedestrian traffic, thus encouraging people to spend more time in the downtown corridor. Through the leadership of Butler and Willigrod, the committee has raised over $180,000 in grants and private donations to fund the Greening Project. In addition to her activities on the Greening Project, Jenny Willigrod finds time to serve as Vice President of the Fountain Hills Cultural & Civic Association. Jerry Butler served on the Strategic Planning Advisory Commission, from 2006 to 2008, and was the Citizen-at-Large member of the Community Focus Group for the Downtown Vision Plan. Currently he is a member of the Fountain Hills Sonoran Conservancy Trailblazers helping to enhance hiking trails in the community. 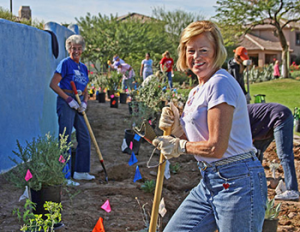 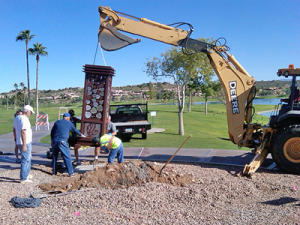 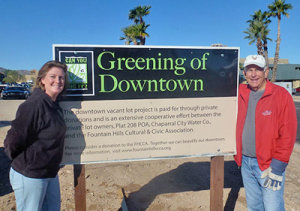 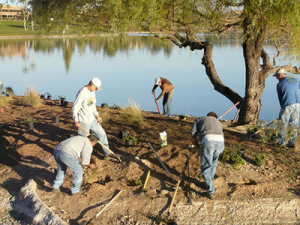