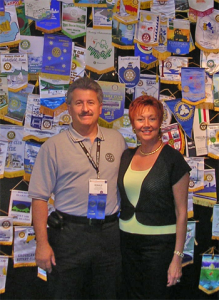 An award-winning lead mechanic for a major airline for 30 years, and a resident of Fountain Hills since 1987, it was Ron Lemon’s extracurricular activities that earned him a place in this Hall of Fame. While still working full-time for the airline, he volunteered as a reservist for the Fountain Hills Marshal’s Department and donated over 743 hours of service in one year. After retirement from the airline, he went to work as a full-time marshal deputy, reaching the rank of sergeant. He headed the Marshal’s Crime Prevention Dept., where he visited schools and service organizations to promote community safety. He was twice named officer of the year. Special Olympics was one of his favorite endeavors. He started the first Law Enforcement Torch Run through Fountain Hills. Later as a member of the board directors, he coordinated the Torch Run for the entire state of Arizona. He was chosen to run the final leg of a contingent of 75 police officers at the opening ceremonies of the Special Olympics in Phoenix. A Special Olympics Hall of Fame Award was implemented in his honor in 2008. Ron joined and became a Colonel in the Arizona wing of the Commemorative (Confederate) AirForce Ghost Squadron based at Falcon Field in Mesa, Arizona.With Ron’s aircraft mechanic skills he volunteered to repair and restore aircraft from World War II. One of the most famous was the B-17 Flying Fortress (Sentimental Journey). He also participated with tours and air shows in Arizona and California. As President of the Fountain Hills Rotary, he helped build homes for Habitat for Humanity, was instrumental in the building of the Rotary Splash Park, developed the first Art Auction Fund-raiser and distributed over 300 dictionaries to students in local grade schools. He received the prestigious Paul Harris Award from Rotary. He was also a highly respected high school football referee for more than 31 years. He served on the board of directors of the Phoenix High School Football Officials Association which inducted him into the Football Officials Association Hall of Fame in 2008 and a Ron Lemon Award was created in his honor that is presented to the outstanding football official each year. An active member of the Fountain Hills Automobile Club, he was scheduled to be the club president in 2008, the year after he passed away