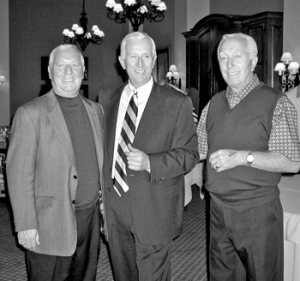 A respected businessman in the community, he also contributed many volunteer hours for its betterment. An original member of the McCulloch sales team,he survived the transitions of the master developer’s ownership to MCO Properties, Inc. In 1980, he was called on to form MCO Realty. He ran that firm’s operations for 15 years before being named to oversee the overall operation of MCO Properties. He retired in 2003. Having been a teacher in his early career, he continued his love for education through his volunteer efforts. He chaired several school bond campaigns that provided funding for Fountain Hills School District factilities including the high school. He was also active with the high school Mentoring Program. He has served as a director of the Sunridge Foundation and the Fountain Hills Senior Services Foundation. Mr. Lickman was also the major contributor toward enhancing the children’s section at the town library complex. He made the library gift in the name of Peggy Puype, a popular local teacher who died of a brain tumor.