After opening the first State Farm Insurance Agency in Fountain Hills in 1974, Mr. Mayper became active in volunteer efforts. One of the organizers of the Fountain Hills Chamber of Commerce, he served as its first treasurer and served one term as president. He also served as a trustee of the Fountain Hills Road District for six years and was a charter member of the Noon Kiwanis Club. After his death in 1987, the Chamber named its Business Person of the Year Award in his honor. He also served on the board of the Fountain Hills Fire District and was its chairman at the time of his death. He was known for running tight meetings that he chaired. An avid golfer, a weeklyÂ men’s golf league held at the Desert Canyon Golf Club was named in his honor. His untimely death occurred as he played a round of golf at Desert Canyon. In an interview with the Fountain Hills Times, Mayper explained his extensive involvement in community affairs â€” “I feel a person owes something to his or her community, and that’s the way I try to work. 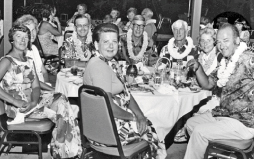