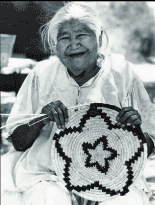 This legendary basketweaver has baskets in the Smithsonian, at Balboa Park Museum, private collections and the River of Time Museum. Bessie at work in her yard was a familiar sight to those traveling along Fort McDowell Road. She was born in Ray, Ariz., on June 15, 1910. Six months later, she was carried in her mother’s arms as her parents rode horseback to Fort McDowell. She married Tom Mike and they raised five daughters. She told the girls stories and sang songsin Yavapai, Pima and Apache. The girls helped her gather weaving materialsâ€”Devil’s Claw from the fields, and Cottonwood from along the river. Once home, Bessie sorted and split branches, shredded them through holes poked into empty coffee cans, flattened the strips with a knife and soaked them again in preparation for her work. Her baskets are noted for their intricate detail. Her daughter, Betty, is the mother of Raphael Bear, former president of Fort McDowell Yavapai Nation.