Throughout his life, John Mooty practiced the words he would like to sayÂ to future generations of children who visit the River of Time Museum. That is, “You are the beneficiary of a fabulous past. Your job is to improve it.” In his native Minnesota, he had served in numerous posts including the chair of the Governor’s Task Force on Education, president of the Minnesota Alumni Association, was on the editorial staff of the Minnesota Law Review, practiced law and was the Managing Officer of a major Minneapolis law firm. Mr. Mooty also was active in politics as chairman of the Minnesota Republican Party. A legend in Minnesota business, he was chairman of the board of Â International Dairy Queen from 1975 to 1997. He was inducted into the Minnesota Business Hall of Fame in 2003. His first visit to Arizona was in 1946 and he had a vision to purchase land that is now Rio Verde. He was a general partner of the development of the Verde Communities and has been a winter resident since 1976. 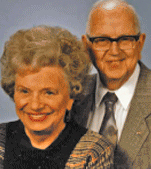