After service in the U.S. Navy in World War II, Mr. O’Flynn’s working career was in the food industry, 18 years with Pillsbury and the remainder with Universal Foods. He was known for his customer service and ability to work with people. Those people skills have been used to full advantage since he and wife Betty retired in Fountain Hills in 1984. Sitting idle in retirement was not for this man. He served on the Road District board of trustees in the 1980s. He founded the local Knights of Columbus and has been active in the Catholic Church of the Ascension. During Jerry Miles’ term as mayor, he asked Mr. O’Flynn, who at the time was president of the Home Delivered Meals program, to volunteer his time to form a program that would benefit the community’s senior citizens. He willingly took the challenge and today, roughly 2,000 people per month are using the Fountain Hills Senior Services for their exercise classes, arts and crafts, computer training and more. He was also a member of Noon Kiwanis and The Club. In 2003 he was honored to receive the Sunridge Foundation’s Champions Award for community service. 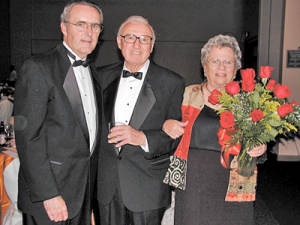 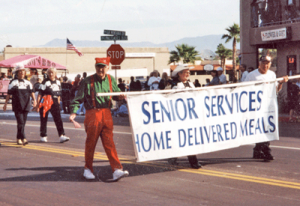 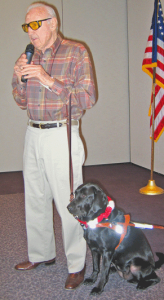