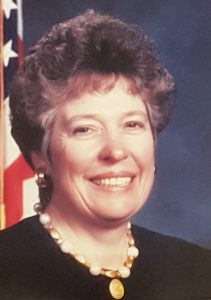 Birdie moved to Tonto Verde with her husband, George in 1999. George still lives in Tonto Verde. She died in 2016. After her 26 years of service with the FBI, Bridie and George moved to Tonto Verde to enjoy golf, hiking and biking in retirement..Birdie enjoyed all these activities but she also moved to Arizona with a lifetime commitment to community service. A year and a half after her death her friends, neighbors and Rio Verde and Tonto Verde residents continue to mourn the loss of a wonderful friend and dedicated community leader.

Birdieâ€™s list of community service accomplishments is long. As her friends point out she was involved in everything and was truly committed to making the Verdes a special place to live. Birdie joined the Rio Verde Fire District board in 2007 as clerk and quickly moved to the position of board chair. Under her leadership, the finances of the Rio Verde Fire District were stabilized allowing for major improvements. Improvements included expansion of the Fire District headquarters for more space for vehicles and equipment and improved sleeping quarters for firefighters and paramedics. Under her leadership the Fire District achieved a 99 percent approval rating from Verde residents. She retired from the board in 2015.

Along with Rod Muilenburg of Tonto Verde and John Burke of Rio Verde, Birdie headed the Verdes Tonto National Forest partnership which in November 2014 began restoration and re-vegetation of the desert bordering the Verdes. Birdie was a wonderful cook who loved nothing better than fostering friendships with food. Birdie and Kathy Sankey chaired the cookbook project after the idea first came up at a Fourth of July party. The completed book included recipes from more than 200 residents.

The 500-page cookbook was sold as a fundraiser contributing $30,000 to POP [Prostate On-Site Project]. Birdieâ€™s career with the FBI included many firsts for women in the agency. In 1992 she was named to head the FBI in Alaska, the first woman in FBI history to lead a state operation. In 1994 she was called to Washington, D.C. where she served as chief financial officer under FBI Director Louis J. Freeh. In that position she led the funding effort for a new FBI lab to expand access by law enforcement agencies all over the country to cutting edge forensic technologies.Â  In recognition of her contribution to the FBI, Birdie received the Presidential Rank Award of Meritorious Executive. A conference room at FBI headquarters in Washington is named for her.