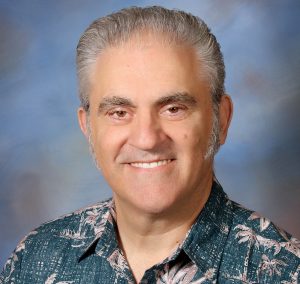 Tony Pistilli has been active with Fountain Hills youth for many years. He has been a major part of the Boys and Girls Club, McKee Branch, helping with fundraising events, as well as mentoring children, offering ideas to improve the branch and helped get the branch involved with the Rotary Club of Fountain Hills.

Tony moved to Arizona from the San Francisco Bay area, after retiring from United Airlines in Engineering and Maintenance for 16 years, completing a 35-year career in aviation with Pratt & Whitney Aircraft (15 years) and America West Airlines (4 years).

He retired to Fountain Hills in 2007. Soon after moving here he began looking for a barbershop quartet to sing tenor and play guitar. In 2008, he joined the OK Chorale and performed in 250 shows in 10 years. As a member of the OK Chorale, he performed at private parties to help sponsor the Fountain Hills High School band and its instrument fund. Tony and the group became honorary members of the band and band boosters.

Tony also joined the Rotary Club of Fountain Hills in 2008, serving as youth leadership chair for 10 years. He initiated sponsorship by the Rotary Club for the Keystone Interact Club at the Boys and Girls Club where a partnership was forged to co-sponsor the Teen Club.

He attended the Keystone weekly meetings to help plan, implement and co-sponsor events such as the Water Park events for youth. He developed a partnership with the Rotary District where McKee members began attending leadership conferences and Rotary Youth Leadership Academy in Heber, sponsoring two teens each year by the club.

Tony served as president of the Rotary Club in 2014-15, 2017-18 and currently is co-president. Rotary activities he has worked on include Feed My Starving Children, Save the Families in Mesa, Make a Difference Day, McKee Golf Car Wash and McKee Car Wash, Fountain Hills Adopt-a-Street program, Ken Burling’s Ton of Trains set up and engineer program at the Community Center and Fountain Hills Salvation Army bell ringers.

He has raised and distributed more than $20,000 each year to charities, youth organizations and individuals including Junior Achievement, Golden Eagle Foundation, Bob’s Free Bikes, Boys and Girls Club and Reigning Grace Ranch. He is a member of the fundraising committee for the Boys and Girls Club’s annual “Youth in the Hills” event.

An aviation aficionado, Tony joined the Commemorative Air Force Museum as an honorary colonel and later became a docent and fundraising volunteer to help raise funds for a new World War I project and qualify for assistance to open the museum to active military and their families. He also is a “Phoenix Navigator” at Phoenix Sky Harbor Airport.