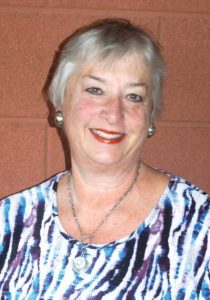 Born in Merced, California, her elementary years were in Kenosha, Wis. and attended high school in the Florida Keys. She was a high school cheerleader. She received her BA degree in secondary education from University of South Florida, where she was president of her sorority.

She took classes at the University of Texas, Austin. while managing a nightclub, she transferred and received a Masters degree in systems analysis from American Technological University in Killeen, Texas. She married and divorced while living in Texas. They had one son, Matthew. They moved to Scottsdale in 1991. Ms. Pruitt started at Fountain Hills High SchoolÂ  when it opened in 1992.

She met Steve Cooper who helped her start the Key Club, which was chartered in 1993. He has always been the faculty advisor and the Kiwanis advisor. He encouraged her to join Kiwanis and work in the community. She moved to Fountain Hills in 1998. She took over as cheer coach in 2008. She has noÂ  plans to retire. She teaches history at the high school, and is still the cheer coach. She has been a Sunset Kiwanis board member during her 25-year residency.

She has also served as the history department chairperson. As Kiwanis Key Club advisor she has literally advised over 1000 students in her 25 years. With these students she has influenced, supported and funded numerous community and area causes for students and children as well as developing young student leaders through their community service projects, character development and team projects. It is by far the largest club on campus.

She also serves as Treasurer of the Sunset Kiwanis. Part of the Key Club pledge recited at each club meeting includes â€œto build my school and community, to serve my nation and God and combat all forces which tend to undermine these institutions.” As an educator and service-leader, Ms. Pruitt has chosen to live this pledge and in doing so influence our youngest leaders see their potential and help meet the needs of their community.