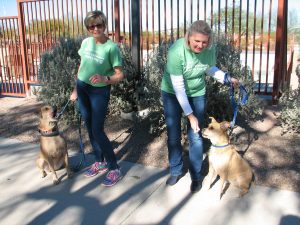 Rescue Pals started ten years ago when three friends decided to participate in the Susan G. Komen 3-day breast cancer walk. Susan Dawson, Christine Schaeken and Maureen Glunz prepared for the 60-mile event by training daily. The women heard that Palâ€™s Inn in Fountain Hills boarded rescue dogs, so they asked if they could walk the dogs while they trained. Palâ€™s Inn, of course, was elated and accepted the offer.

Family and friends were quick to join their efforts. There were many wonderful people who loved dogs and enjoyed being able to walk them. â€œWhen we walked into the kennels,â€ says Dawson, â€œit was like being in a football stadium because the dogs were so excited, knowing they were going for a walk and getting some love.â€

Rescue Pals has a bigger goal than just walking the dogs, however. Their goal is to socialize them and find homes for them. The dogs usually need to learn to trust and be open to people again. â€œWe teach them that walking is nice and that they donâ€™t need to be afraid of trucks, motorcycles or strangers. We do our best to socialize and civilize them, making them the best dog they can be in the period of time we spend with them.â€

The women paid out of pocket for medical bills and boarding and food costs. Since they successfully raised money for the Susan G. Komen walk through a garage sale, they decided they could do the same for their rescues. This has been such a successful way of raising funds that they now do these twice a year, with their 20th sale recently put in the books. They also receive generous donations from people in the community.

Rescue Pals has rehomed hundreds of dogs and given them a second chance at life. They take in strays and owner-surrendered dogs in Fountains Hills and are always looking for foster homes and people to adopt. â€œWe have been so blessed in this community with all the support we have,â€ says Dawson. â€œWithout Rescue Pals, these dogs would be going to the Maricopa County Animal Shelter. Who knows if they would have a second chance there.â€ Dawson likes to remind people that â€œa dog is the only thing on earth that loves you more than you love yourself.â€