A Flint, Michigan native and Williams College graduate, Mr. Ritchie worked in the banking industry in Michigan prior to moving to Rio Verde in 1974. He served on the first Rio Verde Community Association as treasurer. One of the original five incorporators of the Rio Verde Country Club in 1979, he served as its first president until 1980. He and wife Marilyn purchased the Rio Verde Golf Shop and ran it for six years until 1986. Hired by Rio Verde Development in 1981, he was appointed president of Rio Verde Services, Rio Verde Development and Rio Verde Utilities in 1981. He completed the development phase of Rio Verde in 1992 and the development phase of Tonto Verde in 2005.The area’s third community, Vista Verde, was started under his guidance in 2005. He serves on the St. Dominic’s Mission Parish Council. 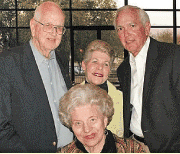