Mr. Rosenquist has committed far more time and effort to our community than most of us can imagine,â€ his nominator said. He has served on many boards and numerous committees over the past 20 years.He moved to Fountain Hills in 1991 with his wife, Carolyn. After graduating from the University of Southern California, he spent his 30-year working career in the computer industry as a project manager and computer design engineer. He had U.S. management assignments in sales, marketing, product planning and industry analysis. His international management assignments were in industry analysis. He retired in 1989. In Fountain Hills, he served on the Civic Association board and the Community Center Advisory Commission. He had a critical role in getting the new Community Center built. An active participant of the planning commission, he was well aware that a huge fund-raising project would be a critical factor in getting final Town Council approval for construction.

When that time came he stepped forward with vigor and put together the entire professional campaign that successfully raised over $500,000 in cash donations, half of which went to furnishings and the other half as seed funding for art works in and around the Community Center area.
A monument to his fine work is the huge donor plaque on the back wall of the lobby and the thousands of memorial bricks surrounding the exterior of the building. Also in Fountain Hills, he served on the McDowell Mountain Preservation Commission and is a past president and treasurer of the noon Kiwanis Club. 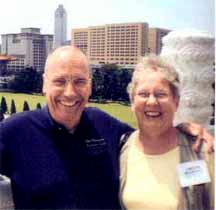 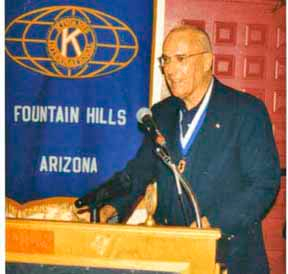