An enterprising businessman, Mr. Ryerson opened one of the Fountain Hills’ first businesses, a Farmers Insurance office in 1973. He is also credited with being the founder of the Fountain Hills Chamber of Commerce and served as its first president. Among his other “firsts” were publishing the first town newspaper called “Free Notes” and the first telephone book with another early-day businessman, Jack Gridley, called the “Fountain Connection.” He led a campaign to form a Fountain Hills Fire District. The issue was defeated at the polls, however, he laid the groundwork for a later successful effort. Always looking for ways to promote Fountain Hills, he started the annual July 4th celebration that attracted thousands of Valley residents to Fountain Park to watch the fireworks display. In 1976, he coordinated a town meeting for residents that brought Sen. Barry Goldwater to Fountain Hills. 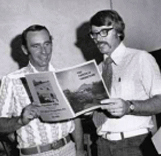