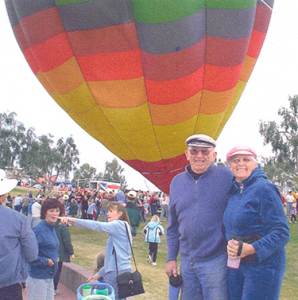 Sally Ballee Atchinson and her two children, Sheri, age 14, and Steve, age 12, were the first official residents to move to Fountain Hills on February 12, 1972. She said it would have been earlier had the utilities been completed. Their home was on Calaveras Avenue, constructed by Cocopah Construction. At the time she was a teacher in the Apache Junction school system. She married Tony Atchinson in June 1972 and moved from the community for a few years, but she always kept her home on Calaveras. Upon returning to Fountain Hills, Sally became active in community groups supporting the arts, the Community Theater and McDowell Mountain Preservation and supported the building of the new Community Center and River of Time Museum. She was forced to leave her docent position at the museum as she entered chemotherapy and was advised to stay away from large groups of people. However, she continued her support of the museum by making hand-dyed silk scarves, which were sold at the museum store. She is a member of the Fountain Hills Presbyterian Church, a life member of the Fountain Hills Herb Society, gardening groups and is the vice president of her homeowners association. Sally Ballee Atchinson remains an active and vocal supporter of Fountain Hills.