“The matriatch of Fountain Hills.” Peg moved here in Jaguar 1975 and lost no time investigating the Fountain Hills Developer, McCulloch Properties, winning their respect and a job in April 1975 where she worked until 1991. She was very active in the early town halls that defined the vision for Fountain Hills. As Civic Association president, she was instrumental in transferring the deed for the community center property to the Town. Elected to the first town council in 1990, Peg served six years, helping the transition from a community development to an incorporated town. Upon retirement from MCO, she was hired by the Chamber of Commerce. She has contributed to the McDowell Mountain Preservation Commission, Sonoran Conservancy, Sunridge Foundation, Golden Eagle Foundation, Community Center Advisory Commission, Republican Club, Fountian Lake Republican Women’s Club, Library Association and Historical Society board. 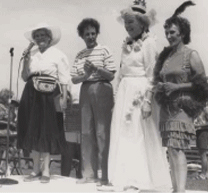