A man with “get it done” talents, Mr. Vandervort moved to Fountain Hills in 1975 after a career with the Leo Burnett Advertising Agency in Chicago. He served in the U.S. Marine Corps in World War II and received presidential citations for his actions in combat on the islands of Palau and Okinawa. After retiring in Fountain Hills, he became an active volunteer. He served on the boards of the Fire District, Road District and the Community Association and was honored for his community service by the Civic Association. Above all, his greatest volunteer efforts were on behalf of the Fountain Hills school system. He chaired bond election committees that were successful in funding construction of McDowell Mountain Elementary School and Fountain Hills High School. He also launced a fund-raising effort to buy cell phones for the School District buses and spent five years as a mentor in the elementary schools. 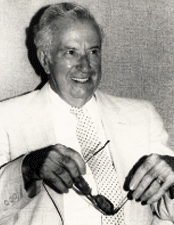