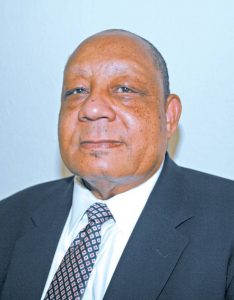 Dr. Wright is the senior member and past president of the Fountain Hills Unified School Governing Board. He is also a member and past president of Noon Kiwanis and serves on the Governorâ€™s Council on Aging and the Board of Directors of the Arizona Board of Executive Clemency. One of his nominators said, â€œDr. Wright exemplifies a servant-leader seeking to unite a community through his consistent and unselfish acts of service toward others. He serves and models a life that uplifts others in all areas of our community.â€

He has been a resident of Fountain Hills since October 1999. In addition to his school board service, he also has been involved in school bond and override campaigns. He also was a member of the Arizona School Boards Association delegation to the Federal Relations Network conferences in Washington, D.C. Dr. Wright is president and Executive Director for the International Foundation for Education and Self Help and is the former president of Cheyney University in Pennsylvania.

He graduated from Fort Valley State University in 1964 with a B. S. Degree in Social Science Education. He also has a Masters degree in history from Clark Atlanta University in 1967 and a PhD in American and New England Studies from Boston University in 1977. Involved in Republican Party politics, he represented Fountain Hills as a delegate at the 2008 Republican National Convention. He serves as chaplain of Republican Legislative District 8. He is a member of the Governorâ€™s Council on Faith Based and Community Initiatives.

He is founder of Christians Teaching Wisdom and president of the Arizona African society. He is a member of many Fountain Hills organizations including the Cultural and Civic Association, the Library Association, the Mayorâ€™s Prayer Group, the River of Time Museum and the Sister Cities program.