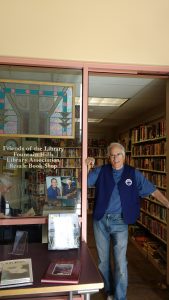 Mr. Ziefert has a broad array of achievements in Fountain Hills. He has been active in education, the arts and community service for much of his life. He taught in Fountain Hills for 12 years, teaching world history, U.S. government and economics. He also served as student council advisor for 12 years.

As STUGO advisor, Mr. Ziefert organized the STUGO Convention in Fountain Hills in 2004. STUGO personnel and students from every high school in the state attended, bringing some 1,500 people to the community for the four-day event. Â He twice was voted â€œteacher of the yearâ€ at Fountain Hills High School, each time receiving the Silver Falcon Award and thus receiving the honor as keynote speaker at graduation in 2002 and 2005. Mr. Ziefert retired in 2007 but continues to substitute teach when needed.

In addition to his illustrious career in education (including teaching in the New York City school system at the same school for 33 years), Mr. Ziefert has served on several committees for Fountain Hills Theater. He currently is president of the theaterâ€™s board of directors.Â  Â He has been a member of Sunset Kiwanis since 2000 and served as its president on three occasions. He has brought a number of projects to the organization and in 2010 was elected lieutenant governor of the Southwest District of Kiwanis, serving as liaison between the district and 10-member clubs.

Mr. Ziefert serves on the board for Congregation Beth Hagivot, is a volunteer at the Fountain Hills Library book store, is a docent at the River of Time Museum and a member of the Friends of the Museum. Mr. Ziefertâ€™s contributions to Fountain Hills and the Lower Verde Valley have been called â€œsignificantâ€ by colleagues.